Last Wednesday, September 14th was the Feast of the Exaltation of the Holy Cross. It’s a quite a mouthful as far as feast days go and in a way as a title it may not have instant appeal. At some level the Cross may present us with fear if not dread. Even in daily chat we use the phrase, ‘that’s a heavy Cross to bear’ or much worse than this, is something like ‘stop moaning or God will send you a bigger Cross’. This brings me to another core question, worthy of reflection, if the Cross is so central to the Christian life, what exactly does it mean for us who believe? How does it impact on our lives?

It is hard for us today to have any real concept of the horror of the Cross at the time of Jesus. It was a cruel instrument of torture and death. It was usually preceded by scourging and a general weakening of the victim. Crucifixion was a gruesome industry. It was perfected by the Romans as an important instrument in their arsenal of domination. Perhaps one of the most horrible aspects of crucifixion was, that in addition to the bloodied, battered physical reality, was the shame. The public humiliation, and crucifixion was a public affair, meant that a family member who suffered such an end, was rarely spoken of again. It is hard to understand how the Cross that was a symbol of such pain, shame and embarrassment is now recognised the world over as the great symbol of hope. Worn by millions for protection, as a mark of faith and clung to as many again in sickness and death, the cross is now at the centre of our faith. Of course the transformation of the cross from cruel instrument of torture to the ultimate emblem of unwavering hope lies in the actual crucifixion of Jesus. It is the hanging of Jesus on the Cross that changes it forever. ‘Behold the wood of the Cross on which hung the Saviour of the World!’ It is precisely because of the blood sweat and tears of Jesus on the Cross that it can never again be simply about torture and death. This is because the death of Jesus ends not in death but in resurrection.

There seems considerable confusion around our involvement or connection with the Cross of Jesus. As alluded to above there is a suggestion that God sends us crosses, indeed worse again that he sends us them to punish us, or at least to teach us a lesson. Nothing could be further from the truth. Will we ever learn the basic premise as told by St. John, God is Love. Beside this truth is another one, as Pope Francis reminds us, namely that God is Mercy. It makes no sense to suggest that bad things, including punishment, come from God. The idea that God is in the business of sending us yet a bigger Cross to teach us a lesson is not coming from a healthy understanding or appreciation of God as revealed to us by Jesus. Sometimes even religious people, or maybe it is more accurate to say, especially religious people, refer to the notion of ‘taking up one’s Cross every day’. It is true that Jesus prepares us for a share in his Cross. However what we experience is little more than the shadow of the Cross. It is also true that we are expected to bear this experience with joy. However we should never lose sight of the fact that Jesus died for us. This was a full and real suffering and death. We are not to reenact in our lives the horror of the crucifixion. Jesus suffered and died that we do not have to. It is good to remember the great line from the beautiful hymn, Abide with Me, ‘hold thou thy Cross before my closing eyes, shine through the gloom and point me to the skies’! Best of all, the story of Jesus does not end on the Cross but in the Empty Tomb. ‘ Why look among the dead for one who is alive? He is not here, He has Risen’!

Next Wednesday, September 21st, is a special day for us here in the parish. This is the day when we give God thanks for Matthew. Here in Ballyfermot we boast a patron saint who is not only one of the Twelve but also one of the four Evangelists, or Gospel writers. In other words the one whom our parish is named after, the one to whom we turn to in a special way, is one who actually knew Jesus. Matthew talked with, listened to, walked with Jesus. In addition to this in Matthew we have one who is not born a saint but becomes one. He has a sinful past. He put himself first and others last. However the story of Matthew becomes one of service. Matthew becomes a giver instead of a taker. Matthew leaves behind his mean, selfish greedy ways and after meeting Jesus and being called by him becomes passionate about living a life for others. Please consider spending at least some part of his feast day with us on Wednesday. The church will be open from 9am – 9pm. The programme for St. Matthew’s Day is available in this newsletter, our website or from the church. It would be great to see you there. 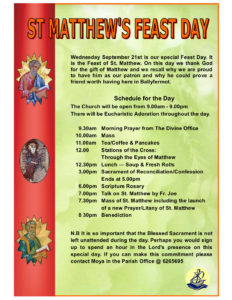 This site uses Akismet to reduce spam. Learn how your comment data is processed.

OUL RONCALLI WAS BEHIND IT ALL ALONG….

Though I did not always see it, and I certainly was not always thankful for it, I have realised with the passing years that I was blessed in my parents, and indeed in their parents, Read more…

FOR ME YOU WILL ALWAYS BE ST. MATTHEW’S!

I guess for some people it was a good example of me making a big deal out of nothing. In some ways I was a bit surprised at myself. Not mind you, that I made Read more…

Will There Not Be a Trace Left Behind

‘Are you going away with no word of farewell ‘Will there not be a trace left behind? Well I could have loved you better, didn’t mean to be unkind, You know it was the last Read more…